[Comment: note that this disclaimer has been drafted in line with the rules of the Bar Council of India under the Advocates Act 1961.

BY ACCESSING THIS APP/WEBSITE:

What is the Procedure to Seek Mutual Divorce in India?

What is the Procedure to Seek Mutual Divorce in India? 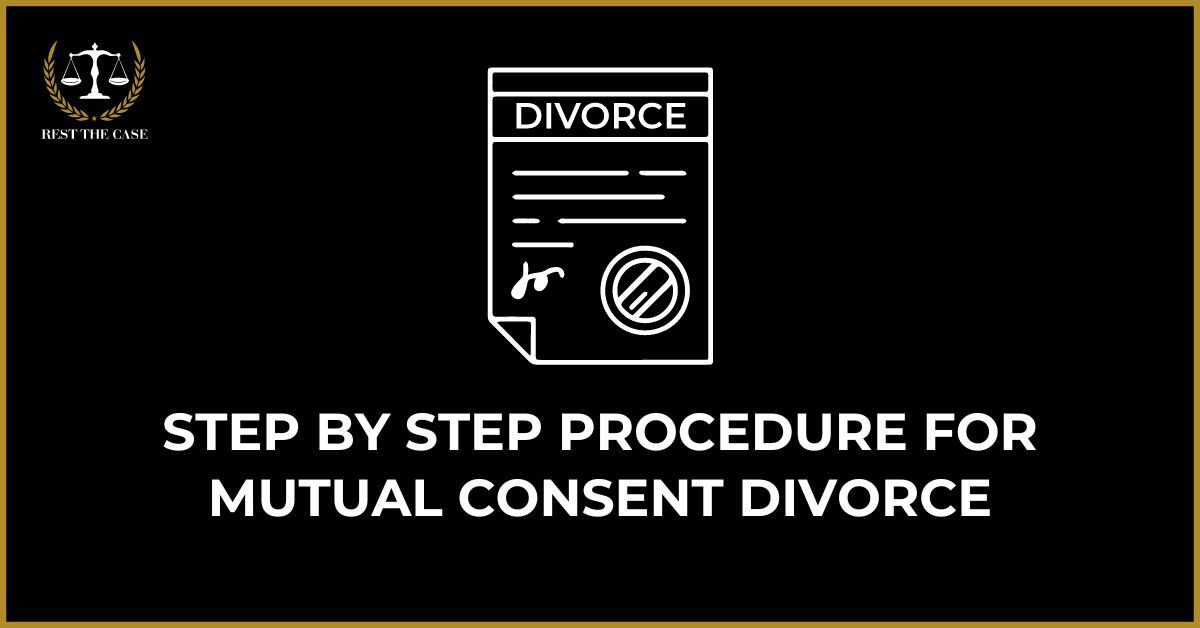 Mutual divorce is divorce by consent of both parties involved in a marriage. The process of mutual divorce tends to be a lot less expensive and traumatic since both parties have agreed to the proceedings and settlements of the case. It is a prerequisite in mutually filed divorce cases that both parties, even though legally married, have been living separately for a minimum of a year.

To seek the decree of divorce, in such cases where the couples have mutual consent, the Joint Petition under Section 13- B shall be filed before the family court of respective jurisdiction(under section 19 of the Hindu Marriage Act). Furthermore, the procedure to seek mutual divorce includes the Joint Petition being filed in two motions within the stipulated time, and hence, the decree of divorce will be passed in two motions.

Procedure to file a mutual divorce in India

Follow these steps carefully to proceed with a mutual divorce in India.

First, a joint petition needs to be filed at the relevant family court. This joint petition is signed by both parties, stating that they no longer wish to continue the marriage due to irreconcilable differences between them. This statement also holds the mutually agreed details of settlement including property, assets, children, etc.

Step 2. Appearing in the court

Step 3. Scrutiny of the petition by the court

Once the petition is filed and both parties appear in the court, the court scrutinizes the petition and documents. If the court is satisfied with the conditions of the divorce and the documents submitted, it will then order the recording of the statement of both parties on oath.

In a few cases, the court might attempt to get the parties to reconcile their marriage.

Step 4. Recording the order and passing the statement

Once the statement of the parties is recorded, the court passes an order of first motion. Once this is through, the court will grant 6 months before the parties can file for the second motion, which must be done within 18 months of the date of filing.

Step 5. Appearing for the second motion

Once 6 months have passed, the parties can file for the second motion. The 6-18 months are granted to utilize any scope of reconciliation. However, if the parties still wish to proceed, there is only one more step ahead.

Step 6. Decision of the court

Upon the absolute agreement of both parties to end the marriage and complete satisfaction of the court, the divorce is granted, putting a legal end to the marriage between the parties.

You Might be Intrested in: Can a person file for a one-sided divorce in India?

Even though the below-mentioned is the list of documents that are usually required to file a mutual divorce case, it is always recommended that you get in touch with a legal professional before assembling the documents.

You can easily consult a lawyer from the comfort of your home through a legal assistance platform, Rest The Case which provides virtual legal support and verified listicles of trustworthy and qualified lawyers around your city.

With or without one, this is the list of documents that you MUST assemble before filing the case.

Conditions for Mutual Divorce - Section 13 – B

The following criteria have to be satisfied while filing the aforesaid joint Petition before the Court:

Slot of 6-18 months between the First and Second Motion

Case Law: Factors to be considered - Silence is not the way of withdrawing the consent

The Hon'ble High Court of Rajasthan has laid down the principle in the matter of Suman v. Surendra Kumar, AIR 2003 Raj 155. that the silence of either party does not amount to withdrawal of consent. In this matter, the Respondent by his continued silence affected the proceeding for more than three years. If he was withdrawing his consent for dissolution of marriage by a decree of divorce by way of mutual consent, nothing prevented him from taking that stand before the Family Court at the stage of the second motion.

The Court further held that the husband, on the other hand, decided to adopt a course of silence to harass the wife further. The Court was not inclined to take a technical view of Sub-section (2) of Section 13B of the Act and fall into the same error as the Family Court did. Merely because both parties did not sign the second motion, it cannot be said that the husband's consent was missing at the second stage. On account of the husband's silence, we would like to take the view that the consent to the decree of divorce being granted has to be presumed.

The Hon'ble apex court in the matter of Sureshta Devi v. Om Prakash, AIR 1992 SC 1904 has laid down the fact that consent by either of the party should be given voluntarily. The Court further held that the move enables the Court to proceed with the case to satisfy itself about the genuineness of the averments in the Petition and also to find out whether the consent was not obtained by force, fraud, or undue influence.

Moreover, the Court can make such inquiry as it thinks fit, including the hearing or examination of the parties to satisfy itself whether the averments in the Petition are true. If the Court is satisfied that the consent of parties was not obtained by force, fraud, or undue influence and they have mutually agreed that the marriage should be dissolved, then it must pass a decree of divorce.

The Hon'ble Apex in the aforesaid matter, i.e., in the matter of Sureshta Devi v. Om Prakash, AIR 1992 SC 1904, laid down the fact that the expression “living separately”, connotes not living like husband and wife. It has no reference to the place of living. The parties may live under the same roof by the force of circumstances, and yet they may not be living as husband and wife. The parties may be living in different houses, and yet they could live as husband and wife. What seems to be necessary is that they have no desire to perform marital obligations. With that attitude, they have been living separately for one year immediately preceding the presentation of the Petition. The second requirement that they 'have not been able to live together seems to indicate the concept of broken-down marriage, and it would not be possible to reconcile themselves.

The Hon'ble Apex court, in the matter of Nikhil Kumar vs. Rupali Kumar, laid down that settled principle that based on facts and circumstances, the Court can waive the six months between the 1st motion and 2nd motion. In this matter, the Court contended that the parties were not happy ever since their marriage in 2011. It is stated that with the setback of a broken marriage, the Respondent needs a change in environment, and thus, she has proposed to move to New York, and it would be difficult for her to get back to India after six months or even sooner. It is further stated that both of them have realized the consequences of their decision, and they have taken the decision out of their free will and without any undue influence or coercion.

In such circumstances, the Hon'ble Apex Court has dissolved the marriage between the parties, and the Hon'ble Court also waived off the six-month cooling period. Therefore, the decree of divorce has been passed by the Hon'ble Court.

Do You Need A Lawyer's Advice ?